Solitario. The title of Delphine Coindet’s new exhibition at Galerie Laurent Godin, boasting an Italian and masculine resonance, will perhaps surprise you with its evocation of solitude. It is in fact an hommage, more so through spirit rather than letters, to the artist Pino Pascali. Not long before his death in 1968, the last work he had made was a large sculpture titled Solitario, a mix between a sofa and a house of cards, build with big planes covered with an unexpected material titillating the sense of touch, and installed in equilibrium. Again in 1968, Mario Merz reads the expression “Solitaire solidaire” on the walls of Paris. He translated it in Italian—solitaire solidale—and represents it in neon letters on a kitchen plate filled with wax. Delphine Coindet’s Solitario thus echoes these great Italian artists who knew how to rejoin such timeless qualities, both contemporarily tactile and dynamic, within aspects of the everyday.

“Solitaire solidaire”: is it not somehow a portrait of the artist, responding to the world – from outer space to our very own experiences – engaged with oneself and united with those who are changing it, but always alone with one’s work?

Solitaire is also the name that we give to diamonds from the most beautiful of waters, that emerge out over rough stones, and which we can isolate so as to admire their luminosity. The precious stone takes on a specific poetical importance for Delphine Coindet, since Diamants, one of her first pieces, which was comprised of five “stones” made of plywood and its opacity enables the structure to appear clearer. If we muse on the fact that carving is the oldest form of sculpture, the diamond becomes an allegory, which connects ancestral art history with our present day. Sculpting is essentially working rough material out of reality, in discovering a certain brilliance, which will be shown in the solitaire. Today sculpture opens screens, which send back various fragments of colour from the world. With these great splinters, sculpture succeeds in piercing our outlook on things, on the universe: Solitario.

Sculpture today starts with a screen, imagery logic, which necessitates the location of every replica, every screen. Ecran 00 represents the first screen, the departure point. Far from being a monochrome, a white page, this Ecran 00 shows a certain diffraction, an oblique and fragmented snapshot of the world and the self, in a rhythm of shimmering and shearing. It is the first material through which the artist takes a “photograph” of the world. Technically speaking, Delphine Coindet originally cut up and collaged images from luxury fashion magazines: a grey deconstruction which dispels the main vision of these magazines, and that of society, in wanting to a model, which breaks down and compels upon the image of men and women.

If the artist’s role is to show us what we are doing to ourselves: divided subjects, worried and enchained to our own image, so entranced with entertainment when we should extract our finest treasures, its role is also to give us a wider perception, and to offer our intimate and individual sentiments towards a more global vision. The rather imposing sculpture Cosmos, which seizes the gallery space, with its wooden framework, its oars, and its coloured bowling balls, transports us through transcending our own terrestrial tautness, into a game, where the trivial succeeds in connecting with the celestial spheres. However, humour is always a very evident characteristic in Delphine Coindet’s work and the spectator will not lose him or herself in this poetic universe where the equilibrium of Calder argue this up to Cornell’s boxes, this artist who knew how to put the planets, the past and present within reach. Of course the matter is serious. The contradictory elements of the sculpture underline this dangerous dialect within which we are all engaged. From one side, the wooden framework, whose composition is almost cubic, connotes the protection of our homes; the coloured oars or of used wood, the sparkling brightly ornamented balls add a reassuring touch to a tempting distraction. But the construction, too open, shows an uncertainty in maintaining an equilibrium, preparing us for the imminence of collapse, the unpredictability of physics that we know now regulated by mathematics of Chaos. Moreover the work created a metaphoric dialogue with our society, where each person gets enclosed in oneself, where affective and physical shocks are distributed through effects. On both sides, it is difficult to not think of the way in which we manhandle ourselves and our planet and up until a point, a breakdown is looming. In order to find protection in this vision of the universe, we can merely row…co(s)mic! 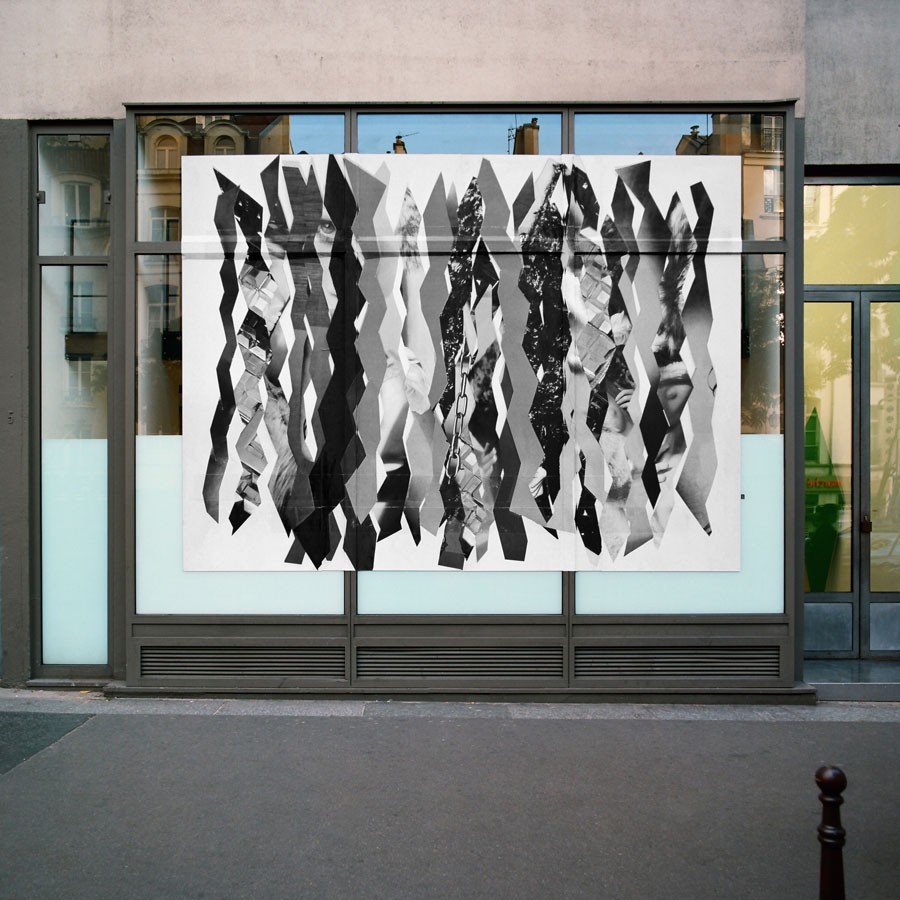 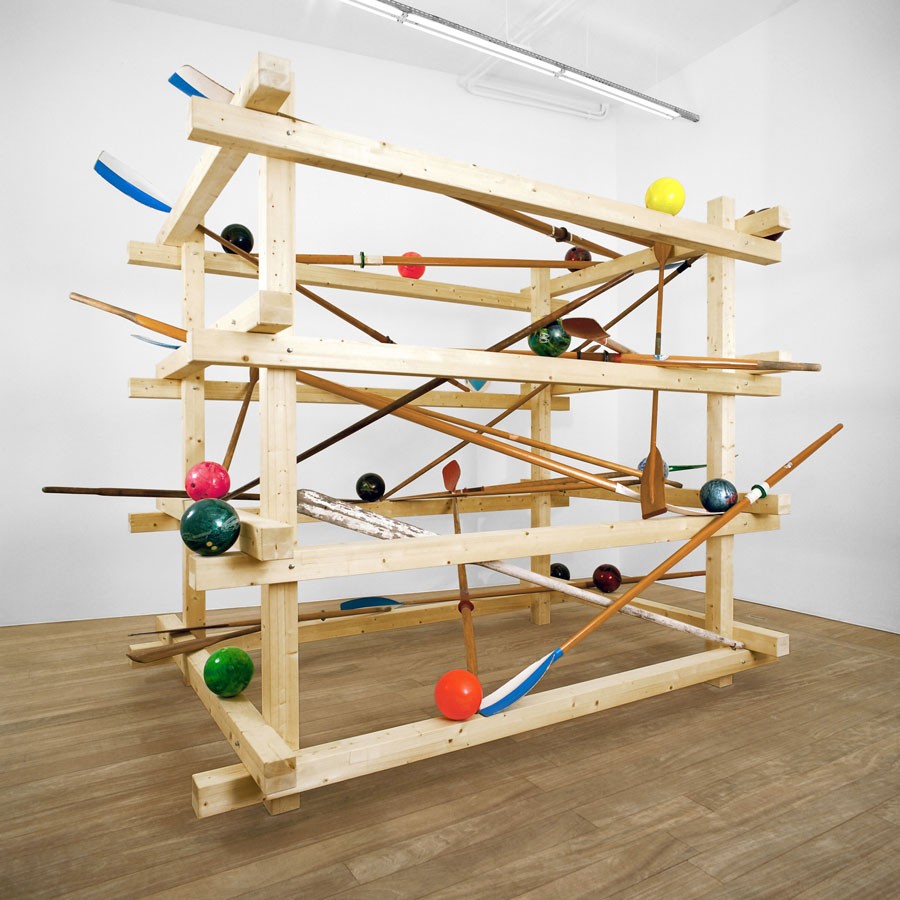 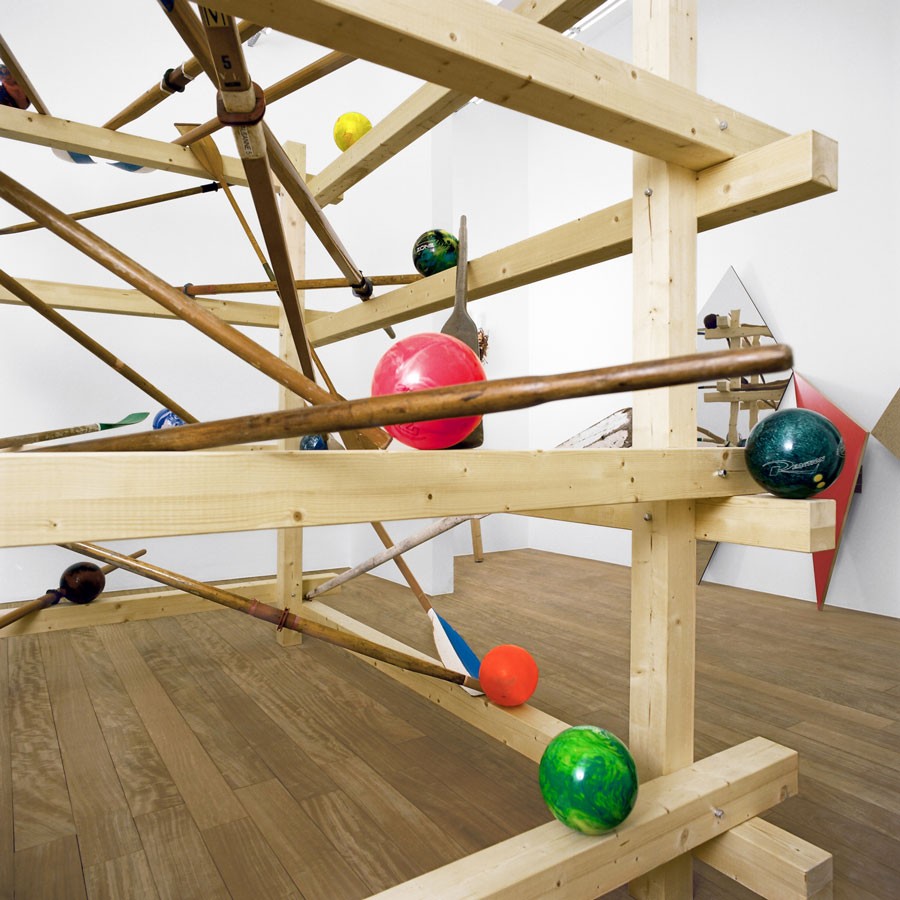 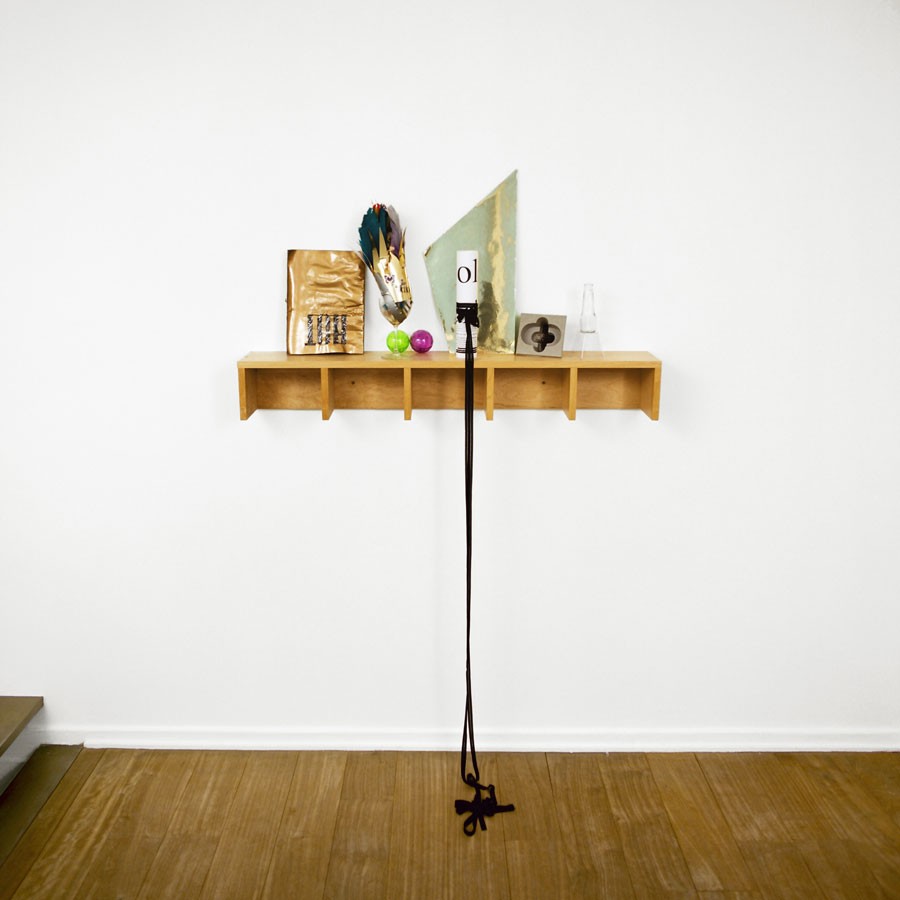 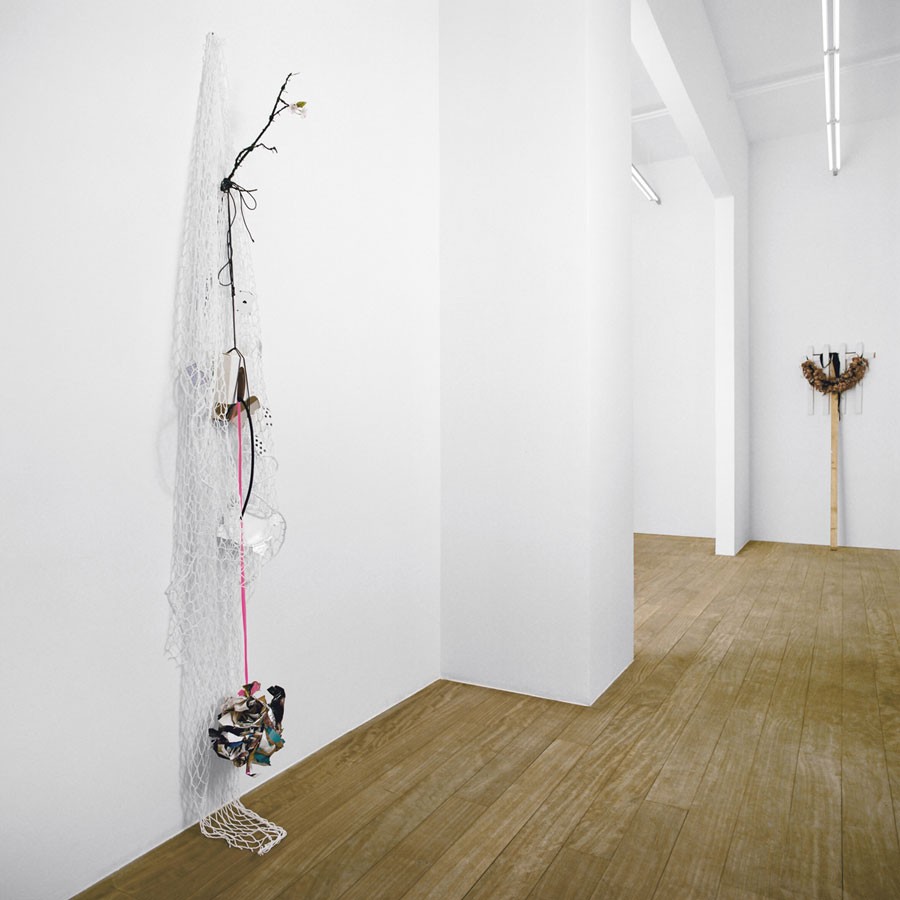 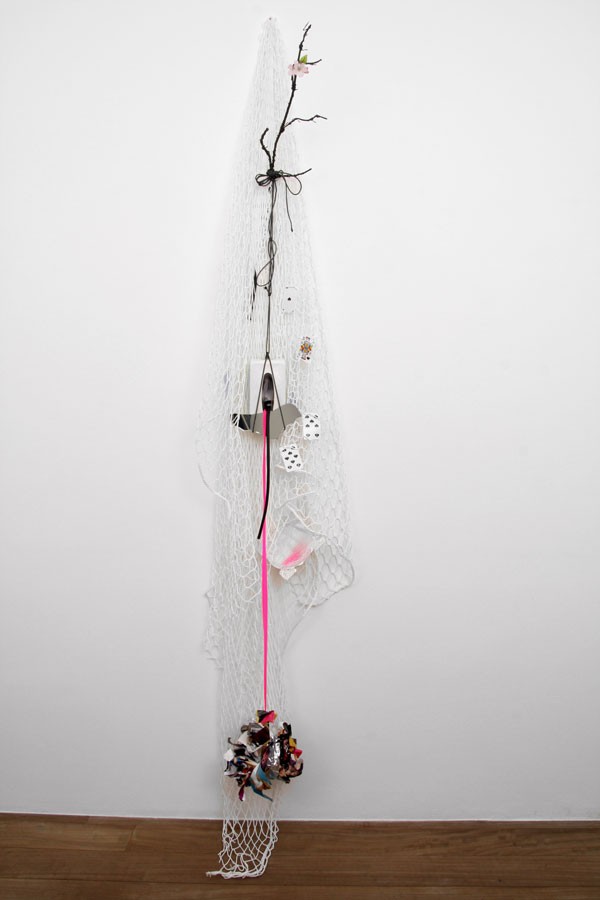 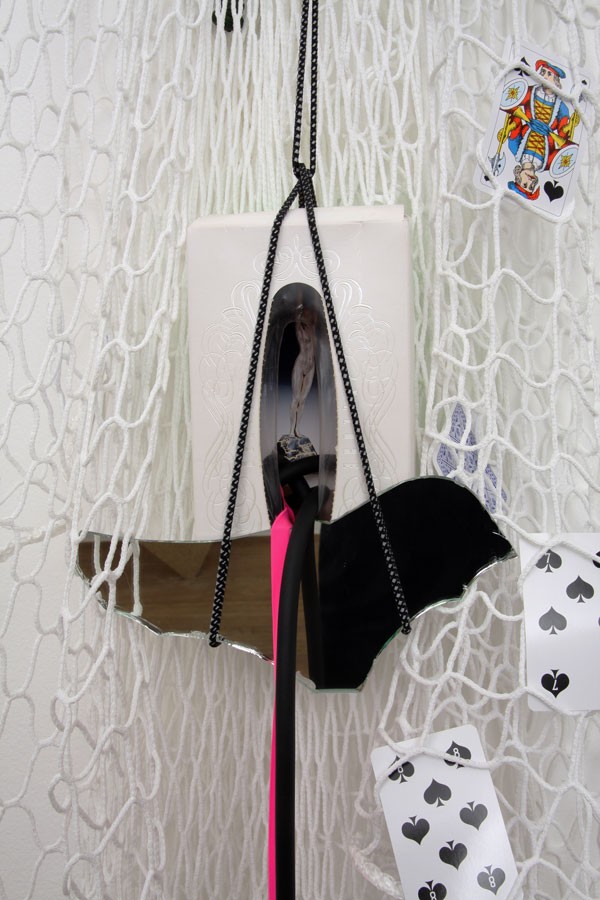 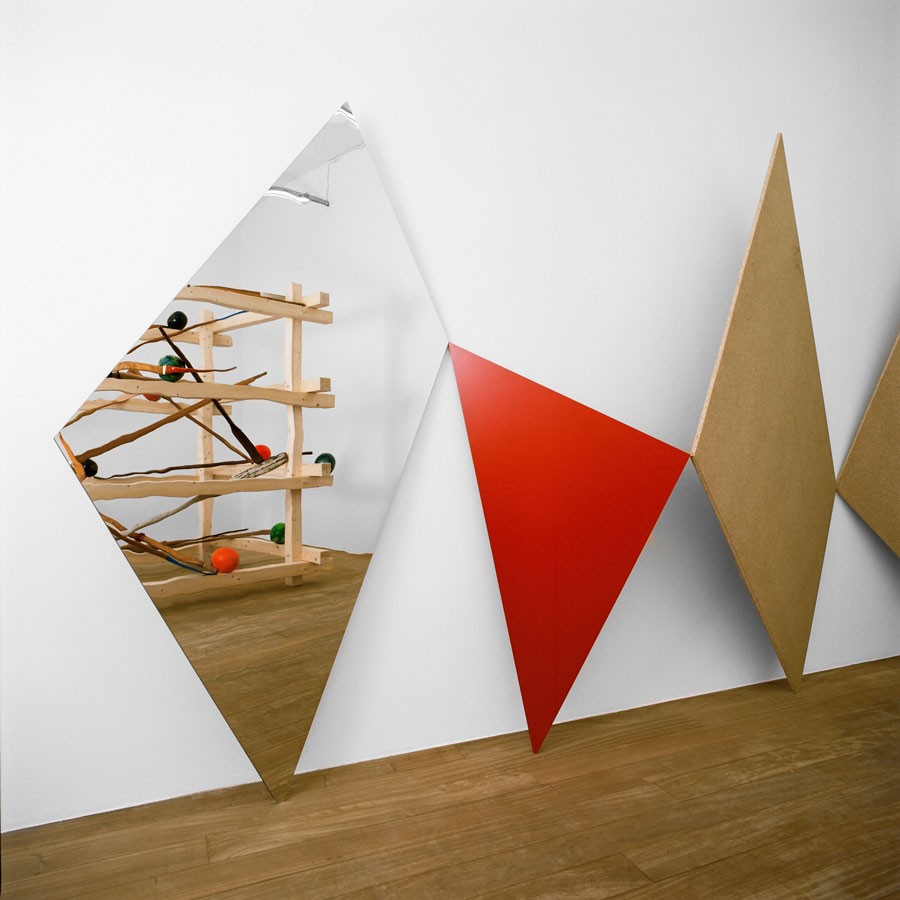 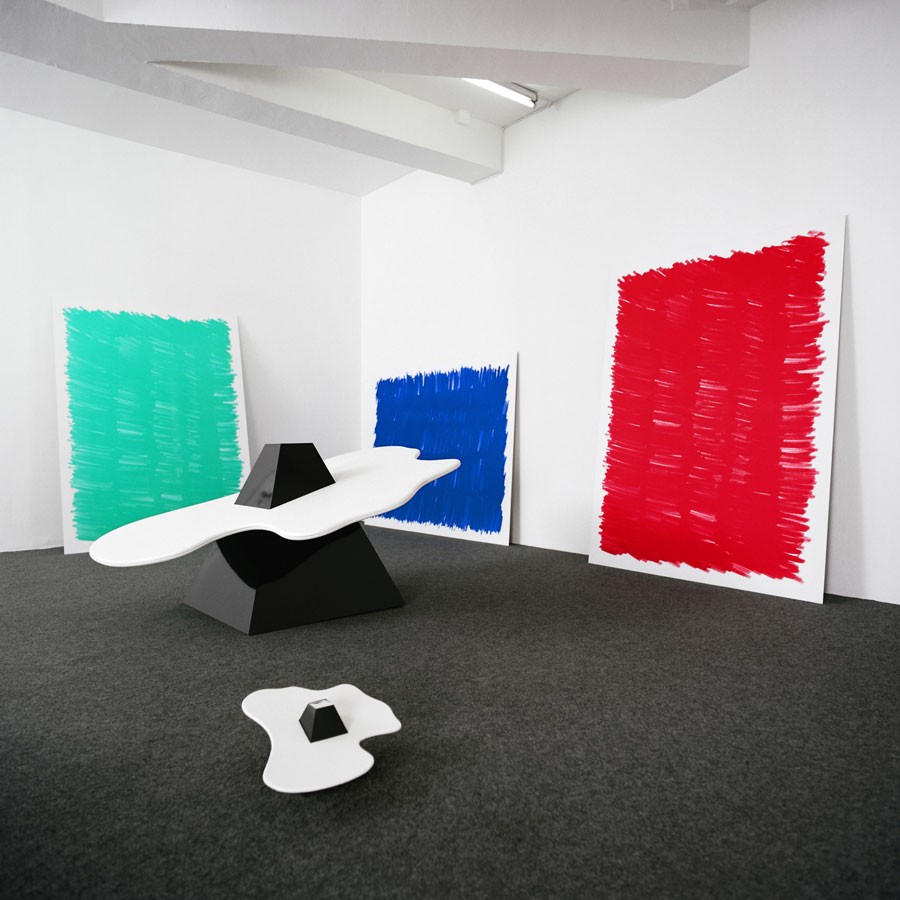 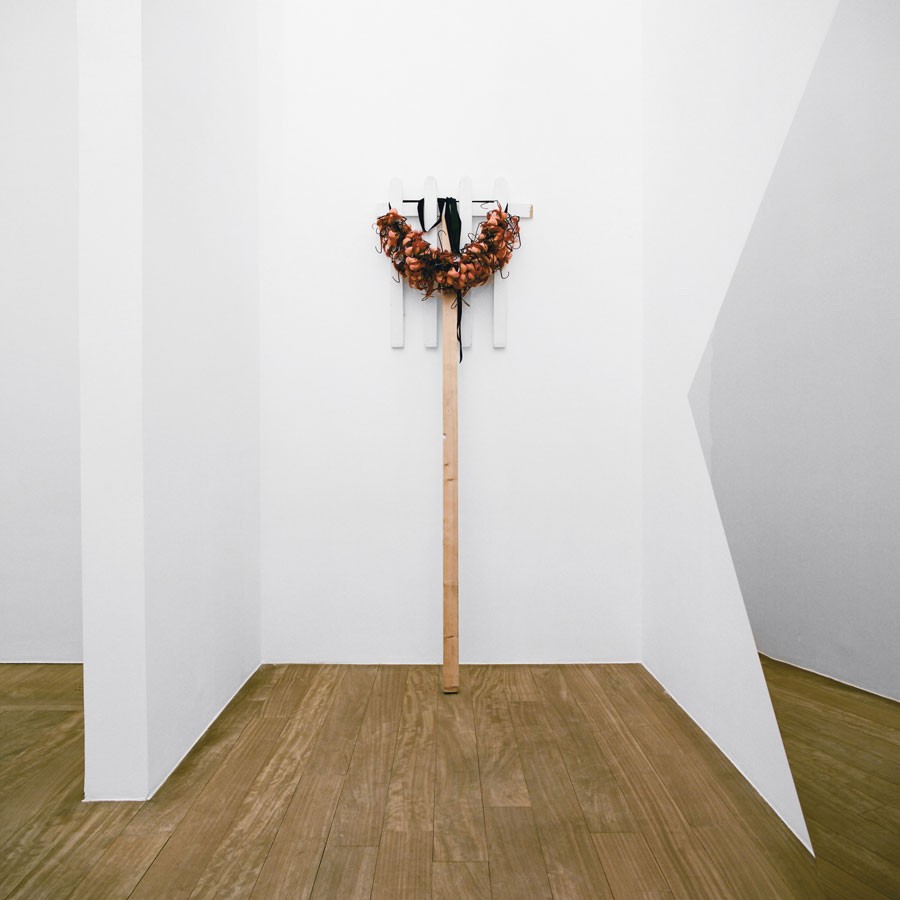